Fun trivia: what does every winning presidential candidate in the history of the United States have in common? Answer: Campaign buttons!

Okay, yes, the losing candidates also used them, but we’re pretty sure buttons gave the winners the edge.

Political buttons have come a long way, but they’re one of the few tools that savvy political campaigners have used for over 227 years. There are good reasons they’ve stood the test of time: pinback buttons are inexpensive, fast to produce and come in infinite numbers of designs to suit different campaign messages.

There’s also something wonderfully democratic about pinback buttons. They’re not a TV ad – a message sent by the campaign to passive viewers – they’re a message distributed only via public support. The more lapels your candidate adorns – the more credibility she appears to have in the eyes of undecided voters.

If you’re running a campaign, you know you need some buttons. You probably needed them yesterday. You also need them to look sharp. They should show you as a professional campaign that should be taken seriously.

That’s where we come in. 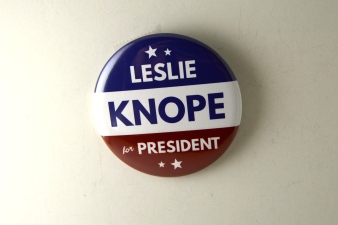 One of our campaign templates – ready for your name! Our love for Leslie Knope is gonna need to be a whole ‘nother blog.

We’re fast. You get your buttons in less than a week, as quickly as overnight if needed. We offer professional graphic design and a number of great templates to choose from. You just have to describe your idea and we’ll do the rest.

Since you’re campaigning to make our country stronger, you should know that all of our parts and presses are made in the USA. Our buttons are printed and pressed in Topeka, Kansas.

How can we help you? Give us a call today to find out.

Be honest: deep down inside, we’re all just birds on the lookout for discarded sparkly ribbon to bling up the nest. It’s a universal truth that people love shiny stuff. In honor of that, we’re excited to launch something new: transparent buttons!

These special buttons don’t have a paper insert. Their design is printed directly onto durable, clear vellum – in reverse to protect the designs. What this means is that the silver back of the buttons shines through, giving you a great silver color to play with that you could never produce with traditional inks – and a nice sheen over the whole button.

We tried these out with a new Topeka design in black and silver and they’ve been very popular. They definitely stand out! You can use color with these as well. Simple designs work best on these. These are priced differently than our regular buttons but we’ll be happy to quote a project for you.

If you dig these Topeka ones, they’re for sale at Kaw River Rustics at 901 N Kansas Ave in NOTO.