Okay 80s kids, who had one of these? Did you get all the stars? Yes, the free pizza was awesome but all the cool kids had all 10 star stickers on these fabulous gigantic buttons, awarded for meeting reading goals. Fun fact: Pizza Hut still runs the BOOK IT! Program, which was created in 1984 and currently reaches over 14 million students every year. It’s one of the longest running programs of the kind in the United States. Tragically, the little bookworms of this generation get a paper passport and can check off goals on an app…YAWN. Bring back the buttons! 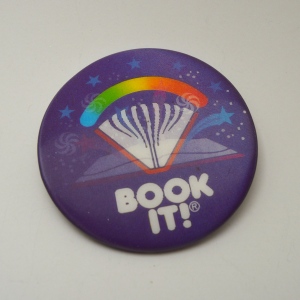 Even the most dedicated wordsmiths will likely learn a new one here: “lenticular,” as in: these buttons had a way cool flashy effect because they used lenticular printing, which prints two sliced images on plastic lenses to produce a different image depending on viewing angle. This technology has been around since the 1940s and has been used mostly for advertising and novelty items, but can also be handy for commercial applications showing objects in motion. Designing one of these items well takes a lot of careful study and very precise interlacing and printing. Creating one as dynamic and precise as the BOOK IT! logo is no easy task.

Kudos to the BOOK IT! Program for encouraging reading and backpack bling, circa 1984.

More info about the current BOOK IT! Program

Here’s what you need to know about Royals fans: we have waited a long, long (long) time for the success we now enjoy. Before last year’s World Series run, the Royals hadn’t been in the post-season since their epic 1985 World Series win. I was 2 years old. The years between post-season runs were unkind. We went seasons without winning records, routinely losing 100 games a season. Royals fans have earned it. 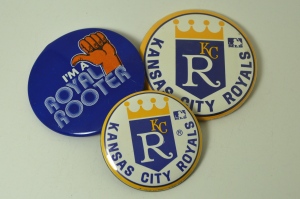 We have a few Royals buttons in the collection. Unfortunately, we don’t know much about the Royal Rooter button. The others are from the original 1969 season and originally featured fabulous purple and yellow ribbons that have not lasted on these. The manufacturer is RR Winona Minnesota, made in the USA (just like ours!).

The Kansas City Royal’s iconic logo is a great graphic design story. The early Royals turned to KC-based Hallmark Cards to create the logo, who turned the task to a group of 15 staff artists. The winning artist was package designer Shannon Manning. Hallmark’s press release noted “The winner was Manning’s design featuring a white ‘R’ and a smaller gold ‘KC’ on a royal blue shield topped by a four-pointed gold crown. The word ‘Royals’ in gold lettering appears below the shield.”

The design was bold, dynamic and memorable. It captured much of the aesthetic of the era’s design but has held up remarkably well. Small changes have shifted the letters over time but the core of the logo survives as one of baseball’s most iconic logos.

Only the best for our Royals!

The most effective graphic design is often simple. Case in point: two of the most successful button designs of all time – but don’t be fooled, simple graphic work is not easy. Truly compelling, memorable images are often the result of months of work and years of training. 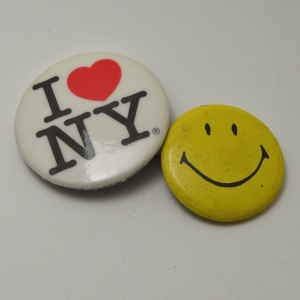 The I Love New York button is part of a larger 1977 campaign to promote New York tourism. The iconic logo was designed by Milton Glaser, renowned graphic artist and author. Designed to help save a city on the brink of collapse, the campaign is widely credited with bringing new energy and pride to the city. Forty years later, the much-parodied logo still moves millions of shirts, pins and other merchandise. Items featuring the logo generate $30 million a year for the owner, the Empire State Development Corporation. Glaser donated his original concept sketch and presentation boards to the Museum of Modern Art in New York, where they are part of the permanent collection.

The classic smiley face button was designed by ad man and graphic artist Harvey Ross Ball in 1963. Ball’s employer, the State Mutual Life Assurance Company, asked him to create a graphic to raise employee morale. Ball created the design in ten minutes and was paid $45. The company started printing the image on buttons, posters and more. It took off. The bright yellow background, dark oval eyes, full smile and creases at the sides of the mouth, was eventually imprinted on more than 50 million buttons.

Designing a button? Keep it simple.

Here’s a recent addition to our personal collection that we’re dying to reproduce: “What Have You Done for Kansas Today?” pinback button. We don’t have any history on this one, we just know everyone needs one. Everyone. We picked it up at Antiques Unique on 6th Avenue here in Topeka, which is one of our favorite places to hunt for local memorabilia. Loving that sunflower border. 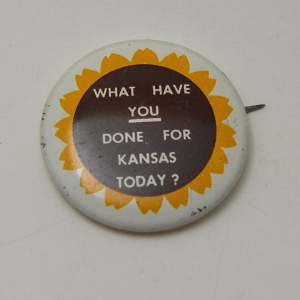 Meadowlark Graphics is made up of two very proud Kansans. We believe Kansas is one of the very best of places to live, create and raise a family. We also see a state in transition, that seems more politically and economically divided than we’ve been in decades. Perhaps this little button isn’t the solution to our problems, but we believe the question it asks very well may be.

There are a lot of places to get buttons these days, but we’re betting you’ll value a few things about Meadowlark Graphics:

Contact Laura and Matt via e-mail at MeadowlarkGraphics@gmail.com or call 785-383-0946